With corporate commitments to ‘net zero’ receiving increasingly close scrutiny, Ryan Smith argues that companies need to carefully consider the type of carbon offsets they use and that a genuine commitment to sustainability requires support for nascent carbon-removal technologies rather than relying on cheap, low-quality carbon offsets.

At a global scale, the concept of net zero is a relatively simple one to grasp. The Intergovernmental Panel on Climate Change’s definition of net zero is when “anthropogenic emissions of greenhouse gases to the atmosphere are balanced by anthropogenic removals”.

But what does this broad concept mean at the corporate level? In principle, it’s not that complicated. By making a net zero commitment, companies are effectively saying that, by mid-century or earlier, they will no longer pollute. There are various net zero standards for companies to follow, but they essentially all make the same demands:

The problem with some carbon offsets

The problem is when it comes to carbon ‘offsets’, rather than buying carbon-removal offsets, businesses have been purchasing carbon-avoidance offsets which historically have been over-supplied and thus comically cheap; the average carbon offset price in 2020 was just $2.50 per tonne. Carbon-avoidance offsets are typically renewable energy generation based or are nature-based solutions (think tree-planting).

Another problem: the market remains effectively unregulated. Regardless of type, high-quality carbon offsets need to demonstrate ‘additionality’ – in other words, they need to be able to show that the carbon they sequester wouldn’t have been removed had the project not existed. And they shouldn’t be easily reversed.

But as the cost of renewable energy falls, it is becoming increasingly difficult to prove ‘additionality’ for the offsets it generates. Meanwhile, reversal is a risk for some nature-based solutions (think fires, pests, storms or changes in land-use). In particular, as our climate warms, the risk of forest fire increases and some of today’s carbon ‘sinks’ risk becoming tomorrow’s carbon sources.

This is not to say that planting more trees in an appropriate manner isn’t a good thing. Deforestation needs to be stopped and reversed. Trees are wonderful for a whole variety of reasons, not all of which are climate related.

In the scramble to net zero, companies should consider that not all carbon offsets are created equal. Nature-based storage (in forests, soil and the oceans) typically stores carbon for less than 200 years. In contrast, geophysical-based storage (by means such as direct air capture, bioenergy with carbon capture and storage or mineralization) stores carbon for 1000 years – but it currently costs more ($141 per tonne on average albeit with a huge range, depending on the technology). 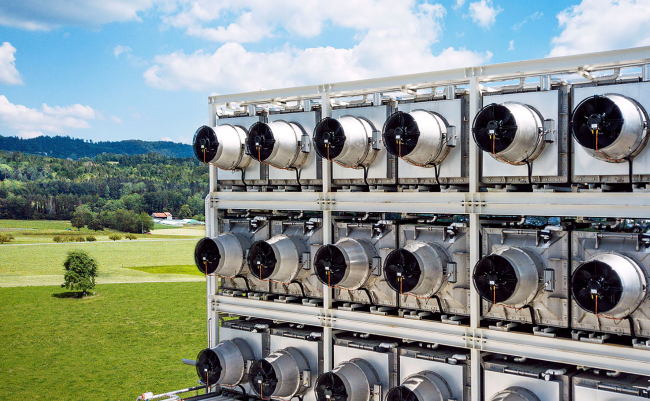 Climeworks’ direct air capture plant in Switzerland; its technology reduces concentrations of CO2 in the atmosphere

Nature-based solutions can help in the sort-term, but as it stands, the supply of solutions capable of removing and storing carbon is only a tiny proportion of what will be needed to reach global net-zero emissions by 2050. As of 9 March, the concentration of CO2 in Earth’s atmosphere stood at 418ppm. This gives us just over 14 years until we get to 450ppm, which would be equivalent to a 2⁰C global increase in temperature (assuming temperature increases based on a recent five-year average). So the development of carbon removal and long-term storage technologies requires greater support. And it needs that support now.

What is Shopify doing?

Although they are not the reason we own its shares, we take a favourable view of the actions Shopify is taking to enable the market in carbon removal. Along with companies like Microsoft and Stripe, Shopify was early to recognise the need to incentivise long-term carbon-removal solutions. We believe this hints at the ‘intentionality’ of its management team.

The company’s Sustainability Fund is willing to pay the early-adopter premium necessary to support emerging technologies engaged in carbon removal. It is deliberately going above and beyond the marginal cost of abatement to spur the development of the carbon-removal market. This investment provides an important revenue stream for these young carbon-removal businesses, helping them to drive down technology costs and sending a signal for others to support these solutions.

To date, Shopify has purchased over 39,000 tonnes of carbon removal across an array of technologies including:

As we have observed before, Shopify’s founder and CEO takes a (very) long-term view: “Shopify is playing the infinite game. We are building a company that will likely outlive all of us.” In this context, the idea that “commerce and entrepreneurship can only thrive in the long term if our planet thrives too” makes complete sense.