Electric vehicles are getting (much) cheaper to produce and sales are growing exponentially. But sceptics still question the case for investing in the companies that make them. Craig Bonthron answers those questions – and explains why the future is electric.

Growth in the adoption of battery electric vehicles (BEVs) is still in its early stages. It took 10 years for BEVs to reach 3% global market share; they did this in 2020. They will almost certainly win another 3% of the market in 2021 alone.

Our long-term conviction in BEV growth is based on micro economics, not wishful thinking. Predictable ‘learning rates’ mean declining costs and increasing range relative to internal combustion engine (ICE) cars is inevitable. Tesla has already provided ample evidence that capex per unit falls and gross margins rise as production increases. And as supplies scale up, lithium-ion batteries keep getting cheaper.

We expect the cost of BEVs to increasingly undercut ICE cars over the next two-to-three years. That will create diseconomies of scale for legacy auto manufacturers as demand shifts away from their largest revenue source (ICE) and the associated assets become structurally underutilised. This trend will be exacerbated by increasing regulation and taxes.

We expect this to mean that nearly 100% of new cars sold in 2035 will be BEVs. Companies that fail to pivot to this new drive-chain technology are at high risk of disruption – and bankruptcy. 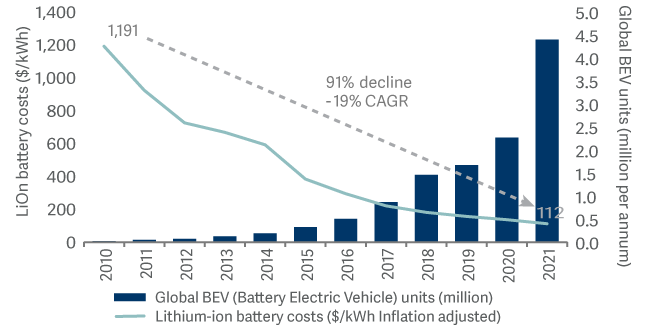 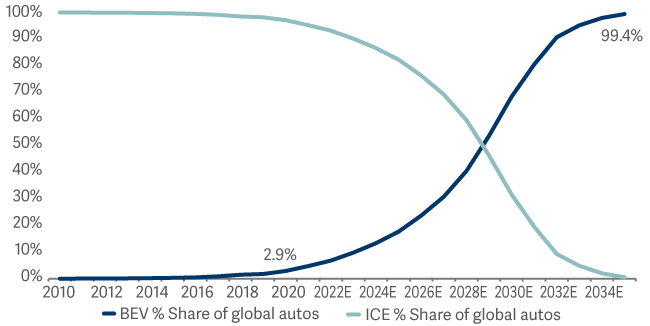 2: Tesla gets all the attention, but surely it will face increasing competition from incumbents and emerging-market manufacturers?

Most traditional car manufacturers find themselves in a difficult situation. As revenues from their traditional business fall, their existing tangible assets (their factories and equipment) will need to be repurposed – or written down. The processes used to manufacture BEVs are very different. At the same time, their intangible assets (their brands and their IP) are less applicable to the new technology paradigm (batteries, electric motors and software).

Moreover, their business models are ‘horizontal’: legacy car brands are really just assemblers, relying heavily on their suppliers to design and build their products. Incumbent car brands will need to find new suppliers if they are to secure appropriate supplies of critical BEV technology.

When a new market is created, vertical integration works best. Horizontal business models struggle because there simply isn’t a mature supply chain to serve them. The inventions and engineering solutions made by innovators can be difficult to replicate and can’t be purchased ‘off the shelf’. In the absence of an agreed industry standard, companies regularly have to reinvent the wheel.

Their greater focus, their access to capital and the strategic importance of the industry in terms of technology and jobs leads us to believe that it will be other BEV start-ups and government-backed competitors in emerging markets who will eventually pose the long-term threat to Tesla – and not the legacy auto manufacturers.

But for the foreseeable future, we believe Tesla’s relative production experience, its focus and its vertical integration (cell design, battery-pack design, motor design, BEV assembly and software) mean that it will maintain its significant lead.

It is producing better cars, with greater range and with software that can be updated ‘over the air’ to improve performance and reduce service costs. Furthermore, it can do this at a much lower cost than its competition, as evidenced by its higher gross margins and expanding cashflow generation. 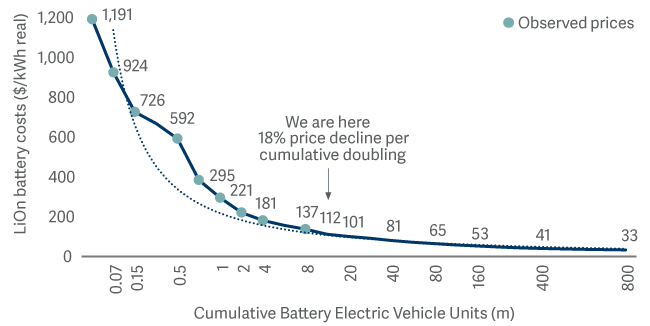 3: Global supply chains are under severe pressure. Can the BEV industry really scale up to meet projected growth? And, if it does, won’t electric vehicles overload the electricity grid?

The most interesting thing to us about the current disruption to global supply chains is how much less of an impact it has had on electric vehicle producers (and specifically on Tesla) compared to the ICE industry.

For example, Tesla surpassed its production and delivery guidance for 2020 – it is also ahead over 2021 to date; most legacy auto manufacturers are halting production and lowering guidance. Why is this? High demand for BEVs is part of the answer but there are supply reasons too. Firstly, BEVs have far fewer parts than an ICE car. There are approximately 20 moving parts in a BEV drive chain compared to more than 2000 in a typical ICE drive chain. Semiconductors may have had all the headlines but traditional auto manufacturers have struggled to procure other parts and materials. Because building a BEV requires fewer parts there is less scope for bottlenecks in the supply chain to interrupt production: there are fewer dependencies.

Secondly, Tesla is vertically integrated, meaning that it produces and controls far more of its own supply chain relative to ICE manufacturers, which have outsourced their supply chains. 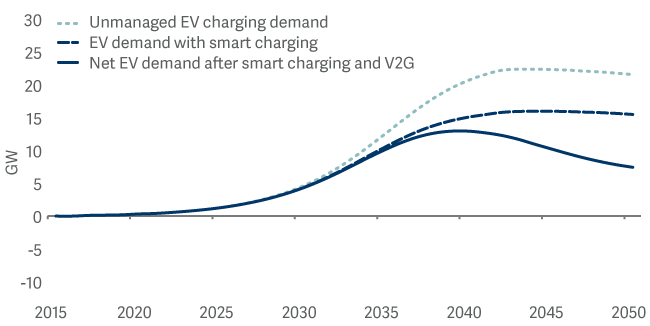 As for electricity grids being overloaded? A number of factors make this unlikely. First, charging will largely happen during periods of low demand helping to level out demand. Second, BEVs will ultimately come to be used as battery storage units distributed across the grid, improving load balancing. Keep in mind that BEVs only use 25-33% of the energy of an equivalent ICE-powered vehicle (which lose most of their energy in the form of heat) – so the move to BEVs will significantly reduce the amount of energy required. While significant investment in electricity grids and in supplies of renewable energy is certainly required, BEVs will not overload the grid if the system is managed properly.

4: Isn’t it true that making batteries is a carbon-intensive process – so BEVs are not actually cleaner than combustion engine vehicles?

There has been a lot of industry-funded misinformation regarding the relative emission benefits of BEVs versus traditional ICE cars. I believe this is precisely because this disruptive shift poses such a threat to incumbents. These industry-funded ‘studies’ typically cherry pick extreme (and out-of-date) data and assume there will be no improvements over time, ignoring improvements in battery production efficiency and the growing volumes of renewable energy in the electricity grid.

Peer-reviewed academic studies (opens in a new window), on the other hand, show that BEVs today produce approximately 60% less carbon dioxide over their lifecycle on average – and could produce 96% less CO2 if the grid was 100% renewable.

5: What are the best investment opportunities in the electric vehicle space?

In highly capital-intensive industries like car manufacturing, first-mover advantage means early winners can capture significant market share. Furthermore, due to early scale advantages and process powers, this market share and competitive advantage can often be sustained for many years.

Conversely, legacy weighs heavily on incumbents during disruptive shifts. The burdens of bureaucracy, resistance to change and diseconomies of scale can be crippling.

So we think the best opportunities are where there is a clear focus, a high pace of innovation and material investment in growth, without the dead weight of the past slowing the shift to a positive future.