Humankind is starting to understand that nature makes an immense contribution to our economy as well as our wellbeing. Satellite monitoring offers one way to protect biodiversity and monitor global supply chains.

Last week – 21 April – marked the birthday of the conservationist John Muir. For those not familiar with Muir (1838-1914), he grew up in Dunbar, a coastal town to the east of Edinburgh, before emigrating to the United States with his family aged 10. A founding father of the conservation movement, he was also the inspiration behind the creation of national parks. Muir was also one of the first to suggest that the natural world isn’t just a resource to be exploited – that it has an intrinsic value of its own.

One of Muir’s insights was that humankind (and therefore the economy), and nature are interdependent. More than a century after his death, that idea seems to be coming back into fashion.

Today, however, we can begin to put some numbers on this relationship. Historically, economic metrics like GDP haven’t been very good at accounting for externalities. They can measure flows but not the (deterioration in) the stock of natural capital that often enables economic activity. A depressing example: if you engage in deforestation, which is detrimental on multiple levels, GDP actually rises.

But in the face of accelerating habitat loss, traditional conservation measures – conserving ecosystems without understanding their value – can’t keep up. A better understanding of the true (or at least a better) economic value of nature is required. Calculating the economic impact of biodiversity loss can produce staggering results – it means identifying the critical role that ‘ecosystem services’ provide in terms of supplying water to agriculture; timber; fisheries; the pollination of crops; providing protection from flooding and erosion; and storing carbon.

Last year, the World Bank put a number on the economic impact that degradation and collapse of ecosystems can have. It published a report, The Economic Case for Nature, which made clear the connection between economic activity and the provision of ecosystem services.

“By a conservative estimate, a partial collapse in select services such as wild pollination, provision of food from marine fisheries and timber from native forests, could result in a significant decline in global GDP: $2.7 trillion in 2030. Relative impacts are most pronounced in low-income and lower-middle-income countries… It is estimated that $44 trillion of global value added—corresponding to more than half of the world’s gross domestic product (GDP) —is generated in sectors such as construction and agriculture that highly depend ($13 trillion) or moderately depend ($31 trillion) on ecosystem services.”

Preventing deforestation is crucial to preserving biodiversity. The majority of Earth’s species – 80% of all animal, insect and plant life – reside within forests. Forests also operate as large carbon sinks, holding huge amounts of carbon both above and below ground (carbon markets are one way of placing tangible economic value on this service). Most of the remaining primary forest – that which is undisturbed – is located in the tropics and retains the highest levels of biodiversity and the greatest ability to absorb carbon.

What are the drivers of tropical deforestation?
Nearly all of global deforestation occurs in tropical and subtropical countries. 70-80% is driven by the conversion of primary forest to agriculture or tree plantations. The chart shows the breakdown of these drivers averaged over the years 2005 to 2013. Further observations since 2013 suggest that drivers have not changed substantially over this period. 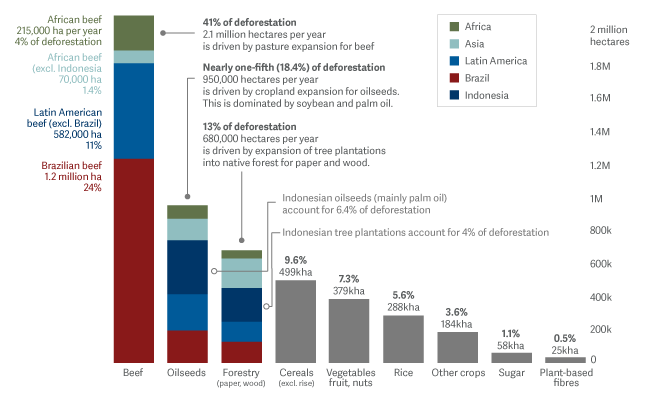 Source: Drivers of Deforestation - Our World in Data (opens in a new window)

While the underlying causes of deforestation are complex and multifaceted, the principal driver is the conversion of forest into land for agricultural use. Almost three-quarters of tropical deforestation is driven by the production of a few key products: beef, soybeans, palm oil and paper. We must all bear responsibility for this – international trade in these products drives demand. But if we have the desire, we could achieve a lot by simply focusing on the supply chains of these products.

The thing that really surprised me was that it [Earth] projected an air of fragility. And why, I don't know. I don't know to this day. I had a feeling it's tiny, it's shiny, it's beautiful, it's home, and it's fragile. Michael Collins, Apollo 11

The overview effect describes the phenomenon whereby, having seen Earth from space, astronauts have often been inspired to engage in humanitarian missions on their return. So it seems apt that satellite technology is increasingly being deployed to monitor the health of the planet. We have written previously about how satellites can be used to detect and reduce fugitive methane emissions from oil and gas plants. But high-resolution satellite monitoring is also being used for daily monitoring of an array of planetary variables, such as:

This information is making supply chains more transparent and help us to hold companies and countries to greater account.

We are only in the early stages of really understanding the economic impact of biodiversity loss. As yet, this greater understanding hasn’t necessarily translated to financial performance at the corporate level. That needs to change. Given the accelerating (and depressing) rate at which we are degrading our natural ecosystems, can we afford to wait any longer?