To decarbonise the economy, the world is going to need hydrogen – and a lot of it. But how that hydrogen is obtained matters; some forms can be equally polluting as fossil fuels. Neil Goddin explains why blue can never be green.

The problem with blue hydrogen…

“Gorgon has been in production for 5.5 years, but there has not been a single day when all elements of Gorgon’s CO2 injection system have worked at the same time.” (An analyst on Chevron’s carbon capture and storage project, the world’s largest)

To decarbonise the economy, the world is going to need hydrogen – and a lot of it. But how that hydrogen is obtained matters.

Most hydrogen is currently produced by heating fossil fuels under pressure – the result is so-called ‘grey’ hydrogen. But although grey hydrogen often uses hydrocarbons that are the by-products of other processes, it still results in greenhouse-gas emissions. Blue hydrogen is theoretically better: it is grey hydrogen but with the greenhouse gases released and stored underground. But despite decades of trying, carbon capture and storage remains unproven at scale.

Many countries and many companies (largely fossil-fuel ones) are pursuing blue hydrogen because it means they can keep using the fossil-fuel infrastructure they already have. This is despite the fact that there is little prospect that blue hydrogen will ever be cheaper to produce than fossil fuels: carbon-capture technology is still a long way from being fit for purpose and fugitive emissions in the natural gas supply chain remain problematic.

There are many ‘colours’ of hydrogen… 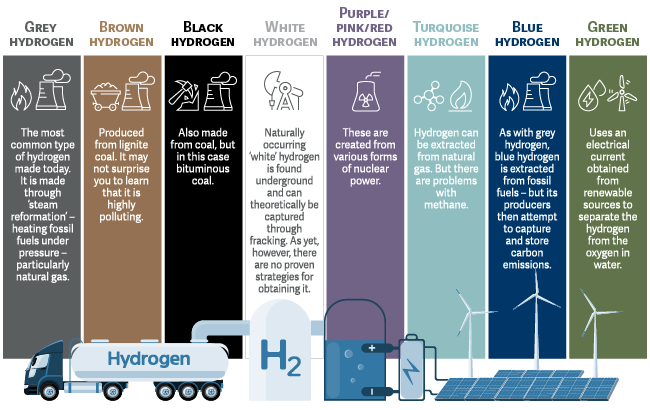 Green hydrogen is our best shot at a carbon-free world

We need to stop burning fossil fuels whether we try to capture their emissions or not! As research published in 2021 showed, around one in five deaths are caused by burning fossil fuels. To put this into perspective, it means around five million people died because of Covid in the last 18 months but around 12 million died thanks to the burning of fossil fuels.

Wind, solar and battery storage will all have their part to play. Which one of these technologies is the most appropriate will depend on the end use and where you are (putting too much reliance on solar energy up here in Scotland, for example, would probably be a bad idea). But it seems clear to me that (green) hydrogen will also be critical – despite what many in the fossil-fuel industry or (more disappointingly) those backing climate-friendly technologies such as batteries would have us believe.

It can be stored, burned and used in chemical reactions in ways that are similar to natural gas, oil and coal. That makes it a good (and in some cases the only) choice for producing steel, making chemicals, aviation, shipping, long-distance road transport and heating buildings that are off grid.

That means using green hydrogen (along with wind power, solar power and battery storage) rather than incrementally better sources of energy, no matter what shade of grey – or blue – it comes in.