When Opec used energy prices as a geostrategic weapon in the 1970s, there were few good alternatives to burning oil. Today, however, renewables are sometimes the cheapest option – and unlike fossil fuels they will only become cheaper with time.

The terrible events in Ukraine have underscored Europe’s energy insecurity and highlighted Russia’s stranglehold over supplies of both oil and natural gas. In response to the conflict, natural gas prices around the world spiked; the price of Brent crude broke through $100 per barrel for the first time since 2014. Some commentators are even talking about oil prices reaching the $180s.

The late Senator John McCain once called Russia “a gas station run by the mafia that is masquerading as a country”. It is 50 years since OPEC triggered the oil crisis, but the West once again finds itself beholden to the whims of a petrostate. Fear of inflation and the associated economic and political damage means that western governments have not – to this point, at least – targeted Russia’s energy sector with sanctions.

This time, it really is different

In the 1970s, the oil-price shock led to demand destruction, a greater focus on energy efficiency and a significant reduction in many economies’ reliance on oil. Back then, however, there weren’t really any compelling energy alternatives. In a symbolic response to the Opec crisis, solar water heaters were installed on the roof of the White House – but at that time, solar-generated electricity cost approximately US$35,000/MWh. 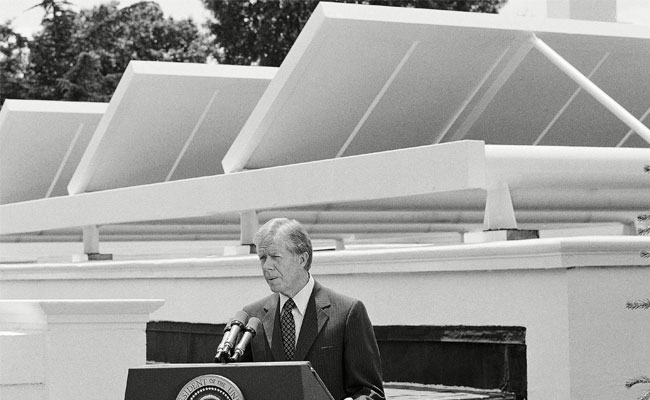 In response to the oil crisis, solar water heaters were installed on the roof of the White House.

Today, in contrast, an entire country – Germany – thinks it is possible to get to 100% renewables within 12 years! Solar now costs approximately US$33/MWh. That’s a remarkable change...

Even a few years ago, few had expected the cost of renewables to fall as quickly as they have. A study (opens in a new window) published last year by the University of Oxford’s Institute for New Economic Thinking suggested the cost of solar energy, wind power and battery storage has fallen (roughly) exponentially at a rate of 10% per year for several decades. In contrast, after adjusting for inflation, the prices of fossil fuels today are broadly similar to their levels 140 years ago (!) with no obvious long-term downtrend. 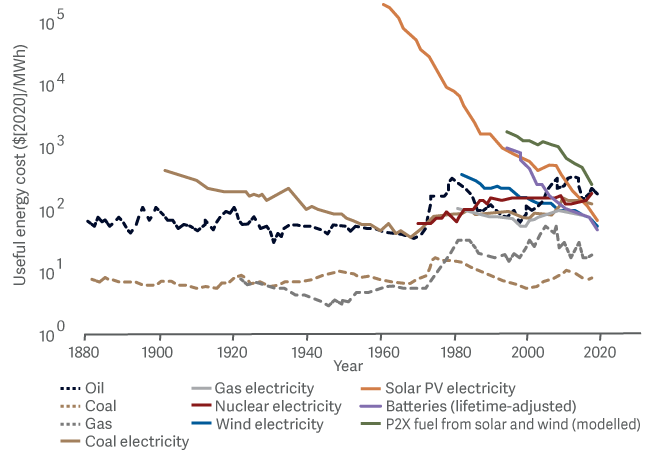 When President Carter installed his solar panels, they simply weren’t competitive. Today, however, renewables are often the cheapest option.

Of course, gas isn’t going to suddenly be off the menu (despite the fact that its PR isn’t that great). In the short term, we clearly need to diversify our sources of supply and increase storage.

As dreadful as events in Ukraine are, they have made it clear that our energy security and climate goals are aligned. Russia’s belligerence is yet another reason to accelerate the energy transition.

The strategic imperative for countries to lead in wind power, solar energy, batteries and green hydrogen has never been more compelling. Weaning ourselves off all fossil fuels is not only the best response to the climate crisis – it might be the only way to a positive future liberated from the influence of petrostates.