Recycling is not enough; the world needs to find a way to make steel in a way that is both ‘green’ and economically viable. Neil Goddin explains why hydrogen may hold the answer.

“Whenever I hear an idea for what we can do to keep global warming in check, whether it is over a conference table or a cheeseburger, I always ask this question: what’s your plan for steel?” Bill Gates

We use steel to build so many things: bridges, buildings, cars, trains, trucks and tunnels. The list goes on. And on.

Perhaps now you get a sense of why Bill’s first question is always about steel.

Metal production over the long term, World, 1880 to 2013
Annual production of metals and minerals by commodity type, measured in metric tons per year 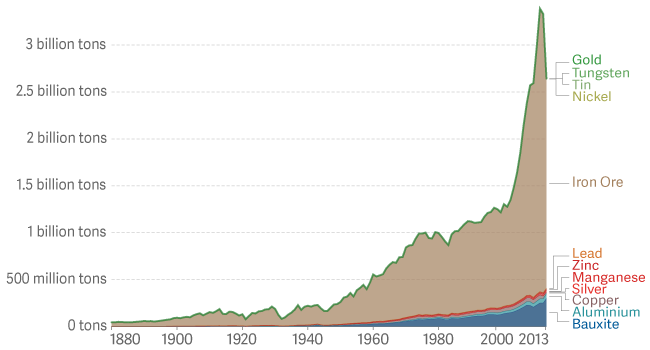 There is some good news

We are getting better at reusing steel. Because it is one of the few materials that doesn’t weaken over time, it can be recycled again and again and again. Around 85% of steel is recovered and recycled – this is a great example of a circular economy. Electricity can be used to melt scrap steel and, as the share of renewables grows in the electricity mix, recycling will become even greener.

But we’re going to need new steel, too. It is already the most reused material on earth so recycling alone can’t provide the answer.

Obtaining metal from iron ore requires extremely high temperatures (above 2000⁰C). Today, the only affordable way to create those sorts of temperatures is to use fossil fuels. This creates huge amounts of carbon dioxide – and the steelmaking process itself creates further emissions on top of this.

There is no easy way to make this process greener. By its very nature, it is fossil-fuel intensive. Electricity is a great solution if you want to roast a chicken – but the temperatures needed to create steel make using electricity to heat a blast furnace akin to filling an Olympic-sized swimming pool with a garden hose.

Technology has the answer

Direct-reduced iron (DRI) is one technology which offers hope that steel can be made more cleanly. This process uses either natural gas or syngas (hydrogen mixed with carbon monoxide) as the reducing agent and it is already in commercial usage today. At around 800⁰C, the temperatures in this process are significantly lower than in a blast furnace, reducing energy usage and so generating less carbon dioxide. These sorts of temperatures can be created using electricity; so if renewables are used to generate power, much lower emissions are possible.

Yet while direct-reduced iron is potentially greener, it is still not entirely green. Our best shot at producing genuinely ‘green’ steel is to use hydrogen. The main by-product of this process would be water as opposed to carbon dioxide. If renewables are used to create the heat and green hydrogen is used as reducing agent, then we have a pathway to green steel.

Making green steel will be cheaper than you think

I am sure your thoughts will have already turned to the question of cost.

ThyssenKrupp, SSAB and Arcelor are all researching ways to make green steel. Until recently, it was about 30% more expensive to produce – but rising fossil-fuel prices mean that gap is closing. A real carbon tax would help to narrow that gap further, but the costs could be on a par with conventional steelmaking processes – or even cheaper – at some point after 2030. Subsidies could help bring this date even nearer. Given the temperatures needed to reduce iron ore using hydrogen are a lot lower than using coking coal, this process can – once at scale – be cheaper than the one we use today.

Once again it turns out that – through a combination of technology, investment and an openness to change – the green alternative is not only better for the environment, it can also be more economical... Bill Gates may need to find a new opening gambit for his conversations soon.